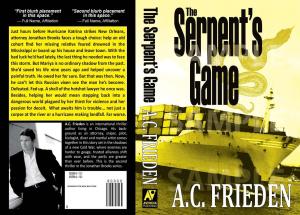 My book cover designer sent me the latest, near-final cover for THE SERPENT’S GAME, my next thriller due out this fall. The latest changes involved adding armed figures climbing the side of the ship. The back text is still being tweaked, ISBN and price bar codes will be added next week, blurbs will follow in late April, and the ARCs will go out to reviewers in May.  There are many aspects to developing a book cover, and it’s interesting to follow the progress and have some input.  Note that the cargo ship is from a photograph I took while researching and touring the Panama Canal, where two of the novel’s main action scenes take place.

The book cover also provides a visual marker of the long road that I’ve had to take for this manuscript.  It’s a signal that things are moving ahead and reduces the abstractness by which I have slaved over the chapters.  Now, finally, the second installment of the Jonathan Brooks thriller series is becoming tangible.

More updates soon, including dates for the launch events in Chicago and New York.

A.C. Frieden is an international author of globetrotting mysteries and thrillers, including the acclaimed Jonathan Brooks series novels TRANQUILITY DENIED, THE SERPENT'S GAME and THE PYONGYANG OPTION. His publishers have announced three upcoming books in the series: LETTER FROM ISTANBUL (May 2021), MIDNIGHT IN DELHI (Dec. 2021) and THE CHICAGO JUROR (May 2022). Frieden is also an attorney, pilot, martial artist, scuba instructor, and former army sniper. He was born in Africa to a Swiss father and a Brazilian mother and lived in India, Switzerland and the UK before moving to the U.S. He has visited over 80 countries, including hotspots like North Korea, Cuba, Russia, Venezuela, China, Vietnam, and Ukraine, many of which are settings in his novels. He speaks French, English, Portuguese, Spanish and some Russian, and carries several passports...
View all posts by A.C. Frieden →
This entry was posted in Book Development. Bookmark the permalink.